Baltimore’s Under Armour is a Trademark

Kevin Plank founded Under Armour on September 25, 1996. The same year, he applied for a trademark to protect the name UNDER ARMOUR. In 1999, Baltimore’s Under Amour became a Trademark.  In September 2019, the trademark was successfully renewed. Plank selected the traditional British spelling “ARMOUR” rather than the typical American because he felt the distinction in spelling was more compelling.

Plank was a former University of Maryland football player. Initially, Plank began the business in his grandmother’s basement. During that time, he traveled the East Coast with the apparel. As the business grew, Plank moved to Baltimore. Eventually, he moved to the current headquarters at Tide Point. 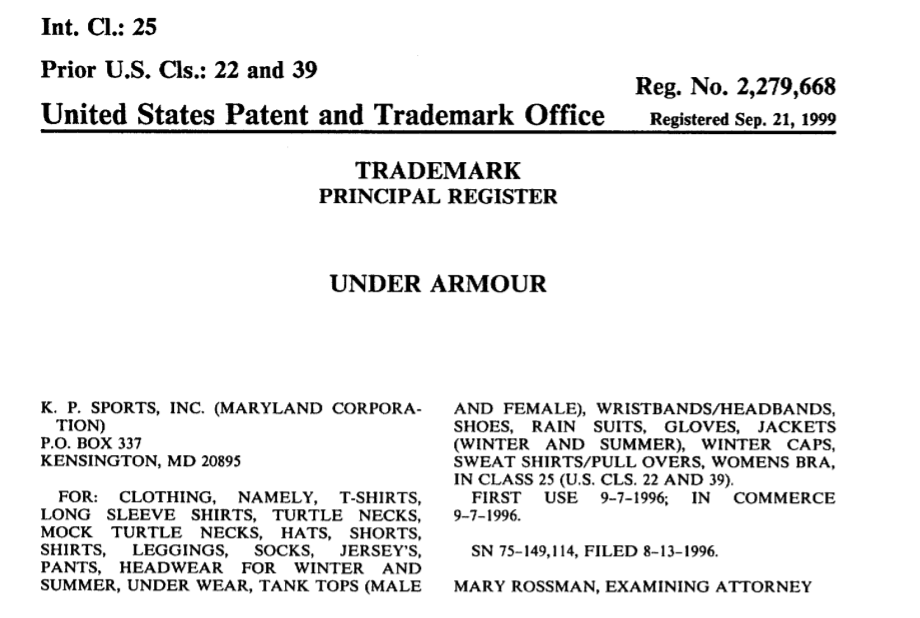 Baltimore’s Under Armour is a Trademark

The company continues to grow in size and innovation. However, the company sought trademark protection early in its history. In fact, the date of the trademark application was August 13, 1996. Accordingly, it was officially registered on September 21, 1999. Plank sought protection early on in the process. He knew his innovation and passion would amount to immense success.

Since becoming a trademark, Under Armour has had a myriad of trademark disputes. The company does not want other companies to use “Armour” to avoid confusion with its own brand. Under Armour has sued Body Armor, a sports-drink company; Salt Armour, a Florida fishing-apparel firm; and Ass Armor, maker of shock-absorbing snowboarding shorts.