M&T Stadium is a Trademark

M&T Stadium is a Trademark. Interestingly, the stadium was originally known as Ravens Stadium at Camden Yards. This name echoes its neighboring stadium, “Oriole Park at Camden Yards.”

But, in 1999, PSINet acquired the naming rights. After that, the stadium was named PSINet Stadium. However, that name did not last long. The stadium quickly reverted to  the name, “Ravens Stadium” in 2002. The reversion was a result of bankruptcy. Then, in 2003, M&T Bank bought the naming rights. The Bank also signed a 15-year contract with the Ravens. This contract was worth $75 million. In fact, in 2014, the naming rights deal was renewed for 10 years. The cost of the renewal was $60 million. Consequently, the renewal extends the current name through 2027.

In 1984, the Baltimore Colts left Baltimore for Indianapolis. This lead to Baltimore being without professional football for 14 years.

In 1996, the Baltimore Ravens became the city’s new team. Likewise, the Stadium’s construction began in 1996.

Previously, the Stadium’s site was the previous location for the Wm. Knabe & Co. piano factory. The factory closed during the Great Depression. However, the Stadium still honors the historic Baltimore company. On the southwest corner of the Stadium, there is a  sidewalk that features a keyboard mosaic.

Today, the new M&T stadium has become an integral part of Baltimore that brings a lot of excitement on Sundays! So, it wanted to protect its name and reputation with a trademark.

M&T Stadium’s Dedication to the Environment

Currently, it is one of the most praised stadiums in the NFL. This praise is for fan amenities, ease of access, concessions, and other facilities. Even though the official name is M&T Stadium,  it is 0ften referred to as “Ravens Stadium.” Additionally, it is recognized as one of the most environmentally conscious stadiums in the US.  To illustrate, the stadium is partially constructed from post-consumer recycled aluminum. In fact, it was one of the first stadiums to receive the USGBC’s Gold rating.

In November of 2013, the Maryland Stadium Authority and Baltimore Ravens earned an award. This award recognized the environmental accomplishments. Specifically, the Stadium earned a LEED-certified “Gold” designation. Furthermore, the U.S. Green Building Council issued this award. In fact, this certification made M&T Bank Stadium the first existing outdoor professional sports facility in the United States to receive USGBC’s Gold rating. A LEED certification is recognized across the globe as the premier mark of achievement in green building.

The Stadium is a Hospitable Host

M&T Bank Stadium is more than just the Raven’s home. The Stadium is a hospitable host to other teams and events. In 2000, it hosted the highly anticipated Army-Navy game. It later hosted the game again in 2007, 2014, and 2016. The Stadium hosted a Maryland v. Penn State game in 2015. The Maryland Public Secondary Schools Athletic Association held the four state football championships for Maryland’s public high schools at M&T Bank Stadium until 2016. Baltimore City College plays Baltimore Polytechnic Institute every November, in one of the oldest high school football rivalries in the United States. This rivalry is well over 100 years old!

The Stadium is a gracious host to more than just other “American” football teams. In fact, the Stadium has hosted Soccer teams in the past.

In addition to soccer, the stadium welcomes Lacrosse teams. The stadium serves as an alternate venue for the Johns Hopkins University men’s lacrosse team, and was the site of the semifinals and final of the NCAA Division I Men’s Lacrosse Championship in 2003, 2004, 2007, 2010, 2011, and 2014. Major League Lacrosse’s Baltimore Bayhawks used the stadium as their home during the 2002 season

The Stadium hosts beyond just sporting events. Even Musicians have graced the field. Some of these musicians and bands include: the Red Hot Chili Peppers, Coldplay, Blink-182, Billy Joel, U2, Justin Timberlake, and Beyoncé.

Even though the stadium is a hospitable host, it wanted protect its name and image. 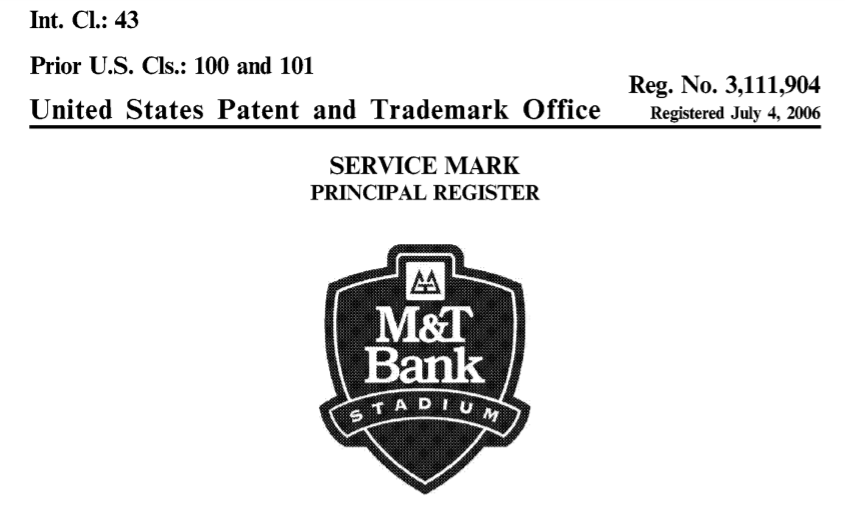 The trademark includes an illustration. It is a crest-like illustration. The M&T bank logo sits at the top of the crest. The words “M&T Stadium” incorporated into the image. However, the trademarked illustration does not claim a specific color.

There is a disclaimer for the use of “STADIUM.” This is similar to the Baltimore National Aquarium using the word “AQUARIUM” in its trademark.

The Stadium is a Baltimore staple. It brings much entertainment, even beyond football. It hosts many events throughout the year. The stadium is great at sharing its space, but wanted exclusive rights to the name. So, it wanted to ensure that the mark was protected. M&T stadium has successfully renewed its trademark status. This, in turn, ensures more years of protection.